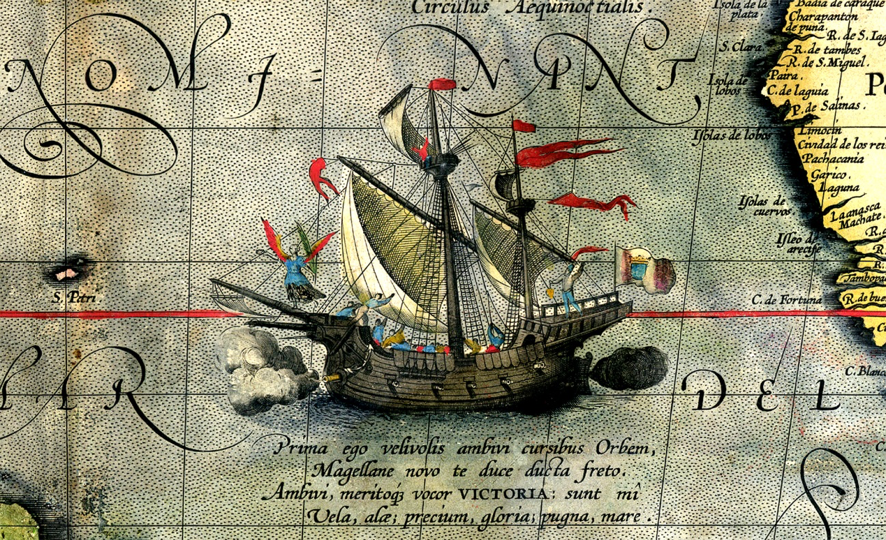 “This ship shall be loable and forever more… there has been no similar one… and I should like to add… these are the eighteen sailors that, with this Nao, elevated Seville, encomiable sailors who deserve bein getched in the immortal memory”

(Letter of Maximiliano Transilvano, Secretary of the King,  1522)

On the 10th of August 1519, five Spanish naos or ships (Santiago, San Antonio, Trinidad, Concepción and Victoria), manned by 245 men, set sail from the port of Seville, commanded by Hernando de Magallanes. These made up what was known as the Fleet of the Spices (Armada de la Especiería) promoted by the Spanish Crown with the goal of opening a new Westbound route that reached the Spice Islands, that is the Moluca Islands, in what is nowadays Indonesia, for there laid one of the most lucrative trades of the time. Thus, always headed westward, they had to find a hitherto unknown path or strait that connected the world’s two great oceans.

For three years, the expedition sailed across three oceans and went along the edge of four continents. They sailed along the Atlantic coast of South America until they discovered the Strait of Magallanes and made for the Pacific. They sailed across the immensity of the Great Pacific during 99 days, recognising islands and archipelagos until they reached the Moluca Islands. In the return trip, the only ship that had survived, the Nao Victoria, sailed during 6 months across the Indic up till the African continent and once it had gotten round the Cape of Good Hope, it set prow towards Spain.

The fleet’s crew went through all sorts of hardship, which made some sailors lose their lives, although others were able to try their luck in those new lands. Magallanes, the instigator of the project, didn’t live to see the end of the endeavour, for he died a few months before in Philippines. Juan Sebastián Elcano, took over the command of the fleet as Fleet Commander. He managed to gather 17 of the already exhausted crew members and together they finished the first circumnavigation of the Earth on board of the only one of the five ships that managed to return to Seville on September 8 1522: the Nao Victoria.

“And better does Your Majesty know what we must value the most, as we have discovered and sailed around the whole Earth…”

(Letter of Juan Sebastián Elcano aboard Nao Victoria, in Sanlúcar, 6th of September 1522) 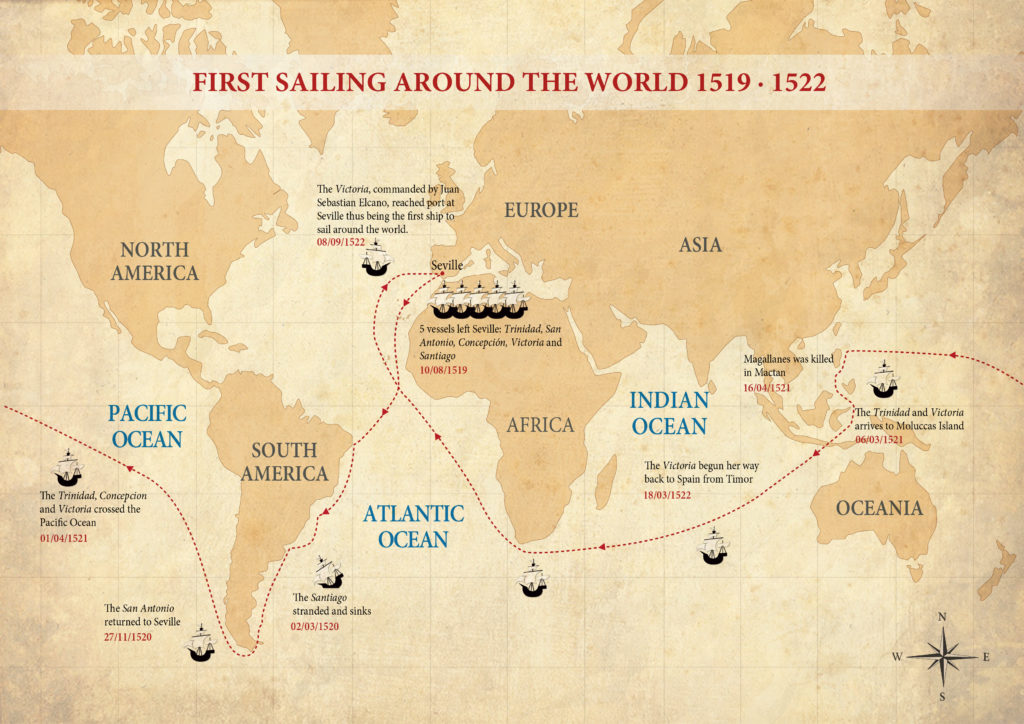 The fate of the five Naos

A final evaluation of the voyage shows 32.000 nautical miles travelled during nearly three years and only one ship that managed to return to Seville. The remaining four suffer different fates:

Numbers by province (within Spain)

Achievements of the expedition