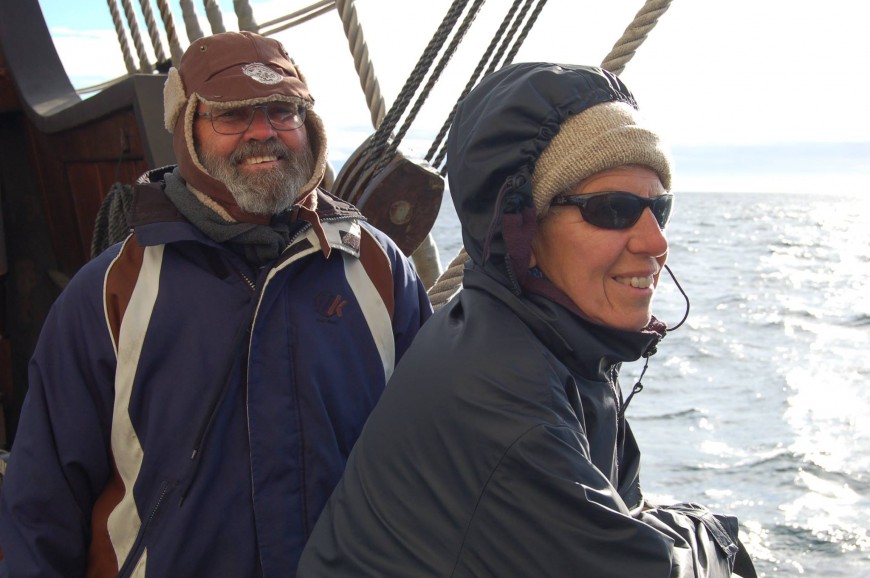 We’re back home after 3 months on El Galeon, but we’re not the same people we were when we left. Oh, we are stronger, thinner, tanner – working on a tall ship and living in the outdoors and eating the marvelous Mediterranean diet will do that to you – but that’s not what I meant.

Every ocean trip we’ve been on in over 20 years of sailing has been amazing, even the ones with storms and waves and lightning bolts. Everyone has made us smaller, humbler, reminding us that we are just a tiny speck on the ocean; and simultaneously made us larger, as we stretched our eyes and minds to reach the horizon, for 360 degrees seeing no works of humans at all but our tiny ship. It has been a clearing of the mental clutter and a giant reset of our perspective on our place in the world. This trip did more, because instead of sailing a modern boat, we were on a 16th century replica, so it also reset our place in time.

Why would we, two Americans, sign up to live and work on a Spanish ship? Doing jobs we didn’t know, working with people we didn’t know, and in an unfamiliar language? Most of the crew were working for their marine careers and gaining experience; we obviously are no longer career-building. And we already live on our own sailboat, so we already can go sailing whenever we want.
Why? To experience (as always) the glory of the sea and to see new places that in some cases we might not have chosen on our own. But also for the fun of sailing a different kind of ship and the opportunity to experience it all from a whole ‘other time period, the 16th century instead of the 21st.

There are no luxuries for the body aboard – 20 of us live in a dormitory of bunk beds and shared bathrooms. Sometimes we had only cold saltwater showers. We were working outdoors in all weather, day or night, mild and sunny or cold and rainy. I never felt I got quite enough sleep, underway or in port, when the off going watch woke me for my watch. Of course on days off you could sleep as late as you wanted, but those were the days you most wanted to get up early to get out and explore the towns the ship visited!

No luxuries of the body, but at the same time, there are many luxuries of the spirit. At sea … no matter how many times I’ve been there, it’s still amazing … and even more so on this sturdy replica. There is no ship built big enough that the sea cannot be bigger, yet, I always felt safe on the Galeon. I called the 1300-mile passage around Nova Scotia and up the St Lawrence Seaway “whales and gales” because that’s what we had – 40-knot sustained winds on the nose, at just a few degrees above freezing on one midnight watch … and whales jumping completely out of the water and doing backflips for us. We had fog and phosphorescence and shooting stars, sunsets and dolphins.

In port, this wonderful construct of a floating historical museum is a teaching platform. I loved helping people understand the historical context, the scale of the ship and what the Atlantic crossing to Spain’s colonies in the new world must have been like, the boldness and enormity of the venture and how bad things must have been in Europe to make people think this was their best option. And in answering their questions and painting that picture for them, I internalized it for myself; to learn – to really feel – what it would have been like in 16th century and get that mental “reset” in time that I mentioned earlier.

As spectacular as the ship is, though, what really made our time aboard extraordinary was the crew. We loved the dedicated people we worked with, who worked hard and played hard. We’re in our sixties, they are mostly in their twenties, which made us as old as – if not older than – their parents. And nothing simultaneously keeps you young, and makes you feel old, as being welcomed into their company and given the opportunity to learn words and jokes and Spanish customs, and make a contribution to the ship’s educational and outreach mission. Our command of the language was only rudimentary. I can say things useful to our everyday life on the ship: “Make that line fast,” or “pass me a napkin, please,” but always in present tense and never the level that would allow us to have those deeper conversations that passing time on the midnight watch is so conducive to: “Tell me about your home in Spain,” or “What are your plans after the Galeon?” Yet, despite the barrier, the friendships were real.

In the weeks and months to come, I will forget many things. I’ll probably forget how to say “port” and “starboard” in Spanish, and the exact sequence for turning on the video projector. But I’ll never forget the sights we saw and most of all the wonderful crew we shared our lives with on the ship.