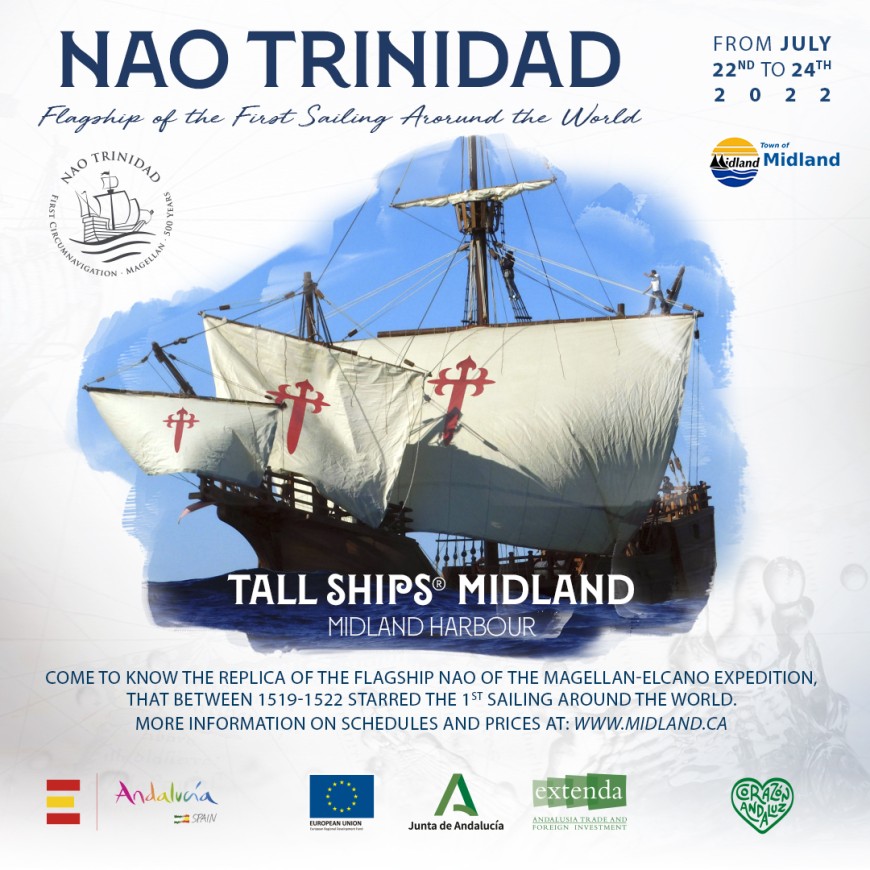 The Nao Trinidad visits Midland, ON

Midland, July 20th 2022.- The Nao Trinidad arrived in Midland the morning of the 20th. She is docked in Midland Harbour and is ready to take part in the Tall Ships Festival in Midland this upcoming weekend.

She started the Great Lakes tour in Brockville, ON, by the end of June, and after that she participated in Festival of Sail in Sandusky, Tall Ship Festival in Cleveland, and Festival of Sail in Alpena where she received more than 8000 visitants. Now she continues her course to Midland expecting to keep spreading the maritime heritage.

The Nao Trinidad was the flagship of what was called Armada del Maluco (1519-1522), captained by Ferdinand Magellan. Five ships (Naos) departed from Sevilla, but only two made it to the Spice Islands; Nao Trinidad was one of them.

This beautiful replica weights 150Tn, 93ft in length, and has a 26ft beam, three masts and a bowsprit. The height of the mainmast is more than 82 feet, five sails and five decks, built with an exquisite work in Iroko (African hardwood) and pinewood. This ship has sailed to many different ports across the Mediterranean Sea and the Atlantic European Coast as a training vessel and floating museum.

The Naos have this unique and original design that made them the most advanced in naval engineering, used first as cargo ships in Spain and then taking the lead as exploring vessels. She is a full-scale replica, faithful on her design and dimensions. More than a hundred artisans of the sea worked on her construction: such as ship carpenters, rope masters or naval engineers.