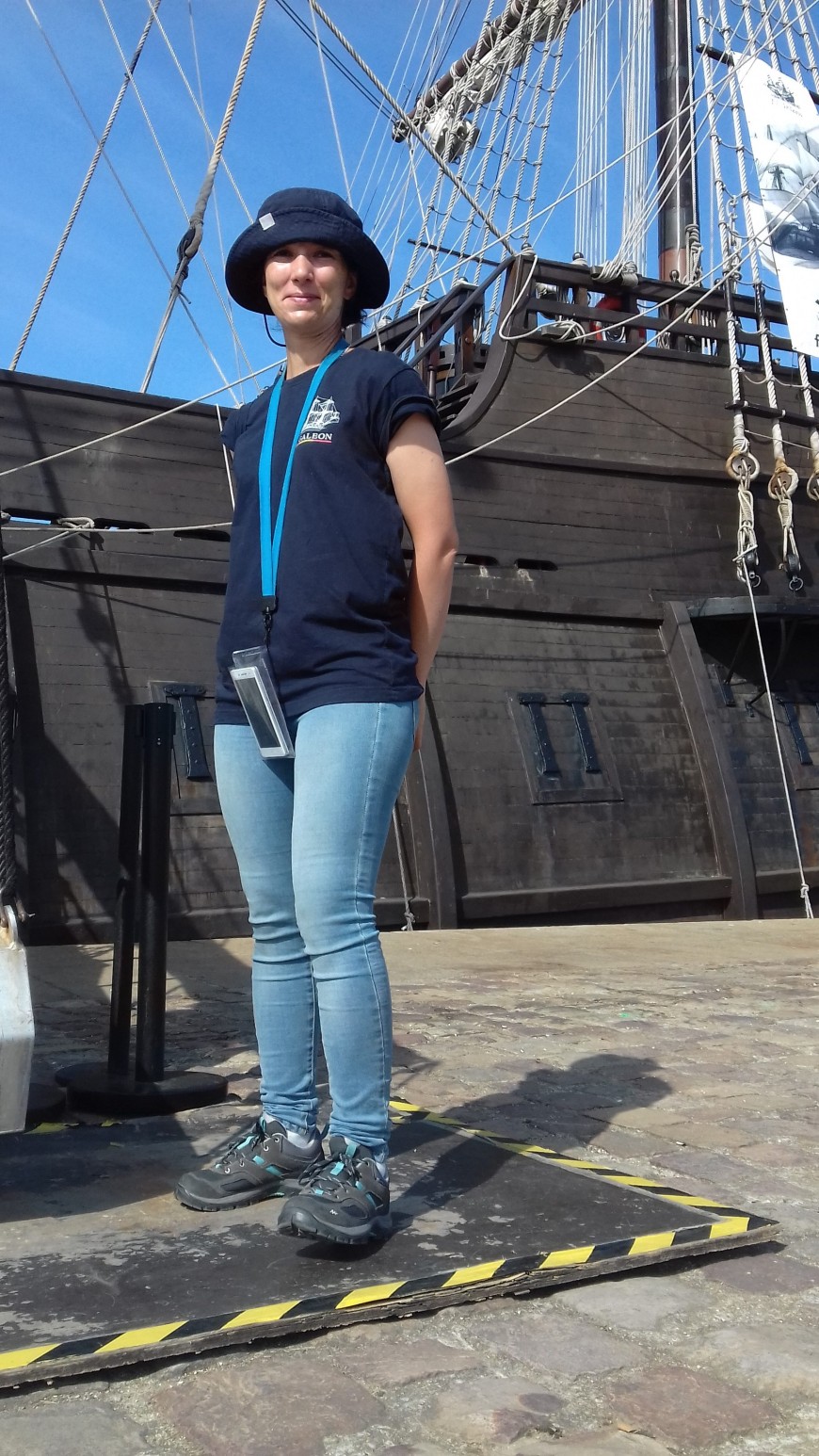 A little more than a month ago I embarked in the Galeón de Andalucía. Back I left home, friends, family, couple … to live an adventure unknown to me. My expertise navigating large lakes, such as the famous Retiro in Madrid, or the mighty and dangerous Manzanares River, where being shipwrecked in its waters can mean an important mutation of the crew members, it was the main reason why I was selected to be part of of a team that would soon become my new family.

During this month I made four trips, from La Rochelle to Bordeaux, from Bordeaux to Nantes, from Nantes to Fecamp and, finally from Fecamp to Honfleur.

This last trip has been brief, barely 10 hours of navigation separated us from Honfleur but its brevity has not diminished its intensity.

It all started with the orders of our captain Manuel who gave us the precise instructions to start our journey. We all occupy our positions, those of maneuvering bow, stern, defenses … I occupied my position of “satellite deck” which consists of being aware of all the comrades to go “to throw a rope” to whoever requires it at each moment. It is a high risk position since you have to pay attention to all the comrades who run hastily from one side to another of the deck, bridge, castle … moving defenses so that the boat is well protected at the exit or entrance to the port, I always “watchful eye” I am aware of each and every one of them at the same time that I learn and they teach me even in the speed and tension that the maneuvers entail. But my “satellite deck” position also has some privilege and it is the power to see the departure and arrival at a port with ease. There are mixed feelings of a bitter and other sweet, the sadness of leaving behind a port and people who crowd to say goodbye and the joy of reaching a new port and feel the excitement of discovering a new place, meet new people waiting to welcome you with longing. All this I live with intensity from my post of “satellite deck”.

Together with us, four trainees joined us with great enthusiasm. I had the opportunity to talk with them, very nice people. Some of them spoke a correct Spanish. It was, during our interesting conversation, when I was required for a job never before done, an event that for many of us was a novelty. The wind was blowing in favor and the captain gave orders to unfold the sails … one of the most beautiful and complex shows I have ever seen …

The comrades took their places, the captain and Carlos went up the mast to the yard of the main mast and began to remove the takers that tied the sails, the maneuver required a lot of precision, speed, agility and experience that sometimes exceeds the vitality of the youth as it was a demonstration of skill and skill to see our captain slide through the yard unleashing the takers who were unfolding the sails while Carlos maintained a spirited fight with one of them but, finally, the battle fought fell in favor of our companion and soon we saw “fall” the mainsail sail. The same operation happened in the foremast of the ratchet. Falete and Pedro were sliding, with something less elegant than the captain, but with an air of Spiderman to fight another battle similar to the one maintained by Carlos in the mainmast. When the battle was won, the sail was deployed and the image will be engraved on my retina for the rest of my life. I was speechless and almost unable to react. Emotions on the skin. But in navigation, “time is money” and the multiple activities required my presence again. On this occasion my role was in the tajamar sighting the horizon and the possible dangers that lurked in the bow because, having the sails deployed the visibility from the bridge from where the ship is governed was totally blind. With my partner Cristina we were attentive to everything we saw in the bow. The trainees accompanied us while they “toasted” on a sunny day.

During our watch in the Tajamar we saw the longlines of a fishing boat that came dangerously close to us (in reality we were getting dangerously close to them …) we communicated the situation to the bridge and quickly turned two degrees to port, enough to avoid the situation with solvency. We congratulate ourselves for the success achieved but without losing sight of the horizon to warn of new dangers. In the middle of all this we heard the sound of the three bells that told us that the food was ready, the trainees went to eat, leaving us on guard until the relay took place. In that space of time occurred a fact that led us to have to use binoculars to get rid of doubts and was to spot port, bow and starboard a kind of “sticks” that we did not know well if they were ships or another type of signal. At that time I began to imagine a series of boats with the intention of boarding … but quickly my companion Cristina broke the charm telling me that they were beacons that indicated the entrance to the channel … As a consolation to the “failed boarding” glimpse some sailboats and a fishing boat full of fish, we knew that it was full of fish because of the multitude of seagulls that followed it: AWESOME !!

Our guard finished. Turn to eat. There we met again on the deck with the trainees who were lying in the “enjaretao” resting and enjoying the journey but there was a trainee that lying face down seemed to be napping, nothing could be further from the reality, the poor woman had got dizzy and passed the rest of the way from the cover to the bathroom to vomit until we arrived but, despite this, we know for herself that she wants to repeat the experience. And it is that “a biodramina in time avoids the movements”.

After resting for a while my services returned to be claimed in the “kitchen maneuver”, a maneuver that I had never done before in my life and I think it is my vocation. For the first time I have stood in front of a “stove” and cook for 24 people! A highly complex maneuver that requires great technicality that increases during navigation. But before stopping to describe this interesting maneuver I have to say that we had a special guest who attentively supervised us at all times, “a long, thin fish with a” sword “that looked at me attentively from the bowl in which it was tucked. And it is that during my time of rest my partner Rafa caught this specimen that accompanied me throughout the “cooking maneuver”. Note: Currently the fish is wrapped in aluminum foil in the freezer waiting for an uncertain future.

Returning to the topic: chicken curry for 25 people. Order that I made with my partner Mario. The maneuver began at 6:30 p.m. and lasted until 10:30 p.m.; one of the most difficult maneuvers of how many have been carried out in the galleon but left to “suck your fingers”.

In this brief navigation many things happened, I overcame some fears when the captain ordered me to paint the boards of the starboard rigging and there I was, with decision and a lot of help from my companion Esperanza who came to my rescue to put on the safety harness and with the V33 paint pot for iron, a wire brush and a brush I joined, going through the gun deck of the starboard deck to the rigging where my partner Dani and Cristina were waiting for me, giving me a lot of encouragement. The sensations can not be explained, they can only be lived.

Finally, between the hard work, laughter, companionship and much complicity we arrived at Honfleur, a port in which a new partner has joined us Marcel and two other colleagues leave, Victor (VJ) and Dani, two great. It is hard to fire people with whom you share so much in such a short time. But it is also a port that supposes for me eating from my countdown and mixed feelings emerge. In two more ports my adventure ends and I return to that house that I left in Madrid, to “navigate by my lake of the Retiro”, I will return to see my friends, family, couple …, but I leave to a family that has caressed my heart, He welcomed me into his house, the galleon and he integrated me with love making me feel part of this great family. I leave a home that is the galleon. I’m going back to Madrid but I’m not the same person who left a little over a month ago. I take a family who have been and will be teachers in the professional and personal. Teachers in teaching me to appreciate the little things in life that are the greatest. I take home a home in my heart.

A big hug to mine, Barbara