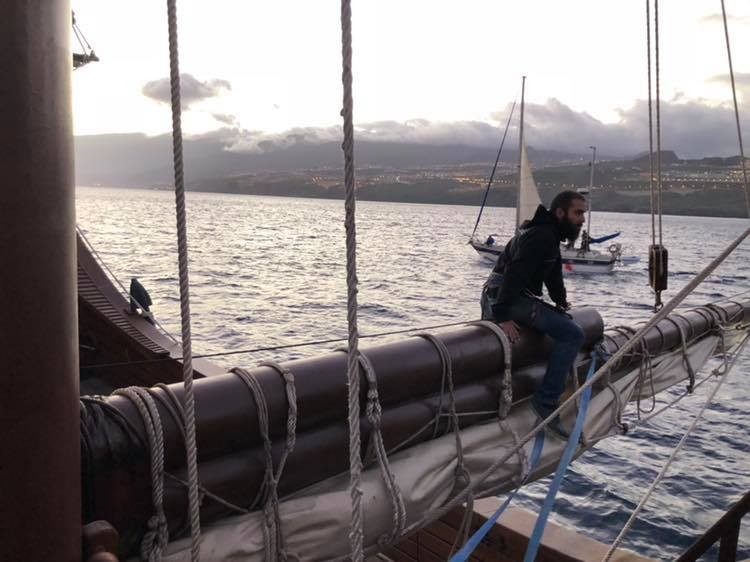 As of December 16th we are at the final stages of crossing the Atlantic and in the coming days we will enter the Caribbean Sea.

We have twenty-one sails set since we last left the port at La Gomera and the seascape around us is blue, light blue and cobalt blue; sometimes a coppery blue, and in the middle of it all our small brown house. If we could see ourselves at bird’s eye view we could probably compare us against the earth and that against the immense black space.

This is our new home, surrounded by basically nothing and we have spruced-it up a bit more than usual these past few days for our brothers on the “other side of the pond” to see; this, sanding the main deck and painting the floor of the cellar, tasks that are normally easy to do but with the swings and sways from deck the simplest task can become a giant feat to achieve and be proud of. My morning watch starts at four where there is no blue out there yet- only black, dark black and a lighter black if anything, all to the point that it’s difficult some days to make-out the horizon line and say what is sea or sky.

I’m half asleep but I gradually wake up as the morning chores progress checking out the machines, the bilges, the condition of the sails, the ropes, all of that. It’s a tough deck-watch but it compensates you at the end of the day because we are gifted with beautiful sunsets and sunrises all for us, sailing under the stars, and entertaining ourselves looking for the polar star and the constellations that little-by-little we learn, and all of this accompanied with some classical music, Queen, Simon & Garfunkel, Reggae, Van Morrison, Stevie Wonder and other great tunes. I end my shift -which was a tranquil one- and I pass-on my responsibilities of the ship back to my mates.

Afternoon shift arrives and so we go fishing again. Usually we catch a “Dorado” or Dolphin fish; however this time we caught two large specimen which we chose to grill- the rest leaving to later cook “ceviche”, because with this group of beings that we now call “the crew” we are able to bestow us some whims of this sort! The Atlantic by far seems so large and uninhabited, however if you take a closer look you can see hundreds of flying fish, some turtles, birds and whales that accompany us throughout the whole day checking us out as we check them out from the Nao. They are, of course, gigantic in appearance to our eyes. We return to our evening watch but this one isn’t a calm one: we hit a squall with lots of rain and shifty winds that constantly change direction, sometimes strong and sometimes weak, all with no order as our sails swell and flatten at mid-storm.

We tried to weather the storm by luffing the vessel into the wind, however we reached a point we could no longer do this due to a large wave that countered us athwart causing the ship to list. It was decided then to return to course and jibe -the maneuver has been learned- and so we braced the yard, secured the yardarms and buntline tacking both the main sail and bowsprit to see what happens. After a reasonable time had passed to see if we achieved anything the weather persisted and so did the listing and fluttering of sails. Our last option, we let go and hauled the yardarms to let the wind pass through the sails without affecting them, all whilst maintaining a course of least resistance and awaiting for better conditions. It is almost dawn now and the storm finally subsided.

The night was a hard one to endure yet a strangely pleasant one to experience I thought to myself in the aftermath. Dawn is up and just before morning watch a subtle wind from aft catches our sails.

Everything seems favorable and there’s plenty of sun. It’s my turn to square the topsail- that sail 25 meters (82 ft.) high-up above the main mast. And there you can find me, basically above everything, the sea an immense blue surrounding this small ship that sways in the ocean making my situation up here a little hard to deal with (but strangely pleasant again).

The rest of the day I relax with a full feeling of satisfaction from a job well done rewarding myself with reading and playing craps and reviewing my English lessons. Today we talked about the possibility of anchoring near the Virgin Islands before reaching Puerto Rico; hopefully, that will entail the task of swimming in its blue waters, but waters that are more turquoise than all seen yet.