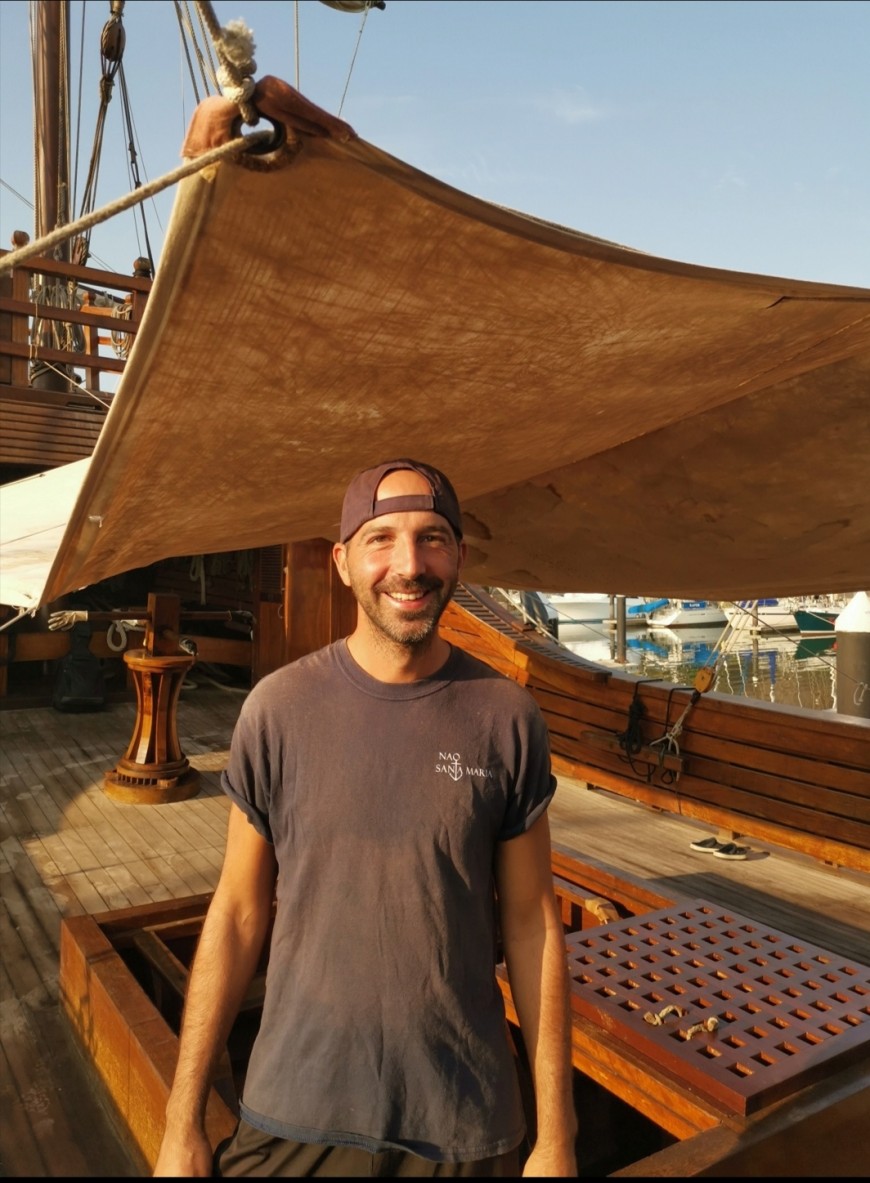 Confined onj board of the Santa María in the Pacific

In the marina of the Grand Isla Navidad Resort, on the west coast of Mexico, a wooden boat
stands out over the others. This is the Nao Santa María, a two-year-old replica of the famous
ship skippered by Christopher Columbus. Its characteristics and design, so unusual today, were
the call to participate in the filming of the series about Hernán Cortés that was taking place just
over a month ago in Punta Pérula. And this is why we’re stuck here.
After filming the series we planned to start a tour along the west coast of the United States that
started in California. In each port we open to the public as a floating museum making known this
piece of naval history. But this plan was disrupted in mid-March when one morning the entire
crew was assembled to report on the new situation that was coming to us.
The coronavirus blew up our plans and decisions had to be made. Faced with this change of
agenda we were given complete freedom to decide whether we wanted to return to Spain or
stay on board and face a rather uncertain future. Of the eighteen crew members seven of us
decided to remain. Some of those who left already had the return scheduled when the filming of
the series ended, others decided to return to their families ahead of schedule when the
possibility of returning home was raised. In less than a week, the hustle and bustle of eighteen
crew members gave way to the unusual silence of seven sailors aboard the Santa Maria. At first
it was weird.
And so, all of a sudden, we changed our reality and quickly adapted to the new situation.
In our favor and being honest, we must say that we have been tremendously fortunate with the
place where we have spent this exceptional moment that we are living. It is a huge resort
surrounded by a lagoon, golf courses, mountains and the Pacific Ocean. There is a great variety
of birds known as eagles, pelicans or woodpeckers and other curious species that we have not
seen before. To this must be added a rich fauna composed of raccoons, badgers, wild boar,
deer or snakes and different fishes that are seen by the navy as the puffer fish. All these
characteristics are the attraction for hundreds of tourists who have been fleeing from cold
climates during the winter. And that was the image we had when we first came to this marine in
late February. The restaurants, the hotel, the swimming pools and beaches were full of clients
who left with the arrival of the Covid-19, giving way to an empty and lonely scenario. And it is in
this context that the current seven crew members of the Santa María develop our daily lives
today.
The reorganization on board has resulted in maintenance work six days a week. Taking
advantage of this indefinite pause, we want to leave the Santa Maria in perfect conditions for
future sailing. In addition, we have introduced preventive measures such as not letting anyone
on board, disinfecting food when the order comes, washing our hands often or keeping a safe
distance from the few people we pass in the marine. On the other hand, there are certain
household tasks such as cleaning and cooking that continue to occupy us on a daily basis. One
of us is in charge of preparing lunch and dinner every day and we try to surprise our colleagues
with our best intentions. This has led to a healthy rivalry on board to see who makes the star

dish of the week. Lately we have also joined the fashion of confectionery and the level is getting
higher. Or at least that we believe…
In the free time we have we usually go for coconuts from the palm trees around us, a task that
although it sounds very idyllic requires some technique and some patience. With the experience
we have improved the way to open them, now that we have our &quot;opener-coconuts-hatchet&quot;.
Soon we will start collecting mangoes from several trees that we have located. We will wait for
May, which we have been told is the best time to harvest this fruit. Watching the sunset has
become a ritual that we repeat almost daily and the walks to the secret beach is one of the
luxuries that we give ourselves from time to time. Reading is also becoming one of our most
recurrent pastimes. At this rate we are going to finish the small library we have on board.
Finally, we try to take up all our time so we don&#39;t fall into weariness. This way the days pass
quickly and I think the key is to stay active, avoiding at all times that feeling of idleness. We do
not yet know how all this will end; various possibilities are being considered. At the moment we
are carrying the quarantine that we have to live on this side of the world in the best possible way
and we will let time decide when we end this stage.