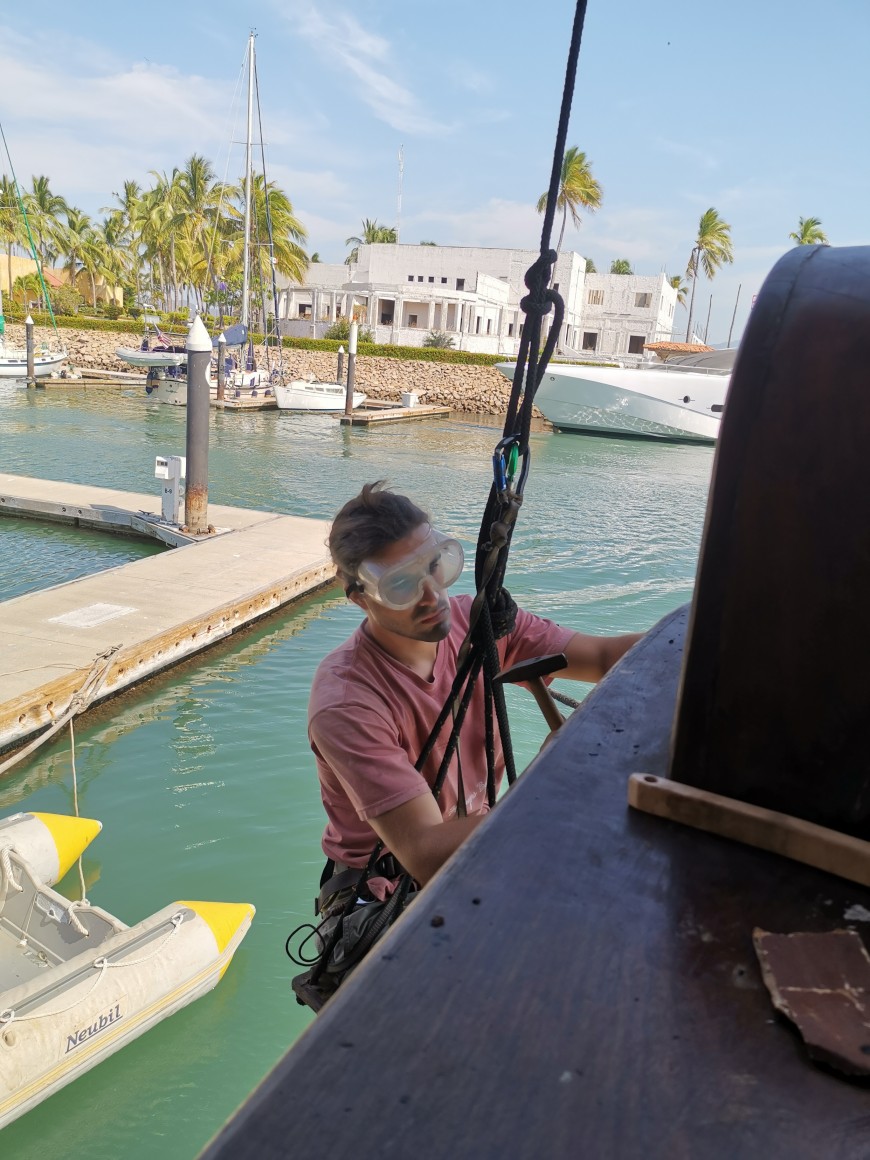 We were sixteen crewmembers when we set sail from Puerto Rico looking for new adventures in the other side of the Panama Channel, where the Nao Santa Maria would be one of the protagonists in an important filming production. Our next port of call was Barra de Navidad, in Mexico, so we expected sailing for four weeks since the departure. After that, we had planned to go to Punta Pérula when everything would have been ready for the filming. It was a wonderful crossing because we were lucky enough to have good weather everyday leaving behind us light storms and strong winds that usually makes the navigation harder. In addition, we had sailed together along the East Coast of USA learning the good marine manners. When we arrived to Barra de Navidad, was beautiful to see lot of palm trees and different kinds of life around, although was suffocating the sun heating during midday while
we were docking. We had already passed the hard work to bring the boat to the west side of
America and everyone was happy for it.

The art department started to work soon hiding the modern areas of the ship with boxes, bales
and sacks. Then, they were giving her more personality with more objects around counting with the help of the crew. We putted a row-boat on top of the main deck! We were working in a rush because we had to be in Pérula in a week and the first filming day would carry out onboard of the Nao Santa Maria.

They filmed all the shots they need it and we enjoyed with the numerous filming crew in every sailing. They used to carry innumerous kind of staff God knows what they needed it for. Some of them were so curious asking about the rigging or maneuvers. They also were astonished when they looked up while we were working up high in the yards. After days under the burning sun of Mexico, we had finished our compromise with the filming production successfully: it was a moment to look forward.

The coronavirus whispers started to be a real thing the day we docked in Barra de Navidad again and the filming production decided to stop everything sending their employers to home. At the same time, in Spain was declared the state alarm. As a result, the ship would stay docking with a minimum crew and most of crew left the boat. Some of the colleagues had planned their flight back to Spain after the filming, and others had to due to the new circumstances. It was not easy to say goodbye after sharing a lot of
experiences together. Eventually, seven crewmembers stayed onboard, changing our schedule
and focusing on maintenance jobs on a daily basis. We couldn’t leave the marina area. The
sailing along the West Coast of America to reach Canada in summer was forgotten.

But we are spending this period in a good way. During the last month in this privilege place, we have been doing different works to keep the boat ready to sail; from painting the top of the masts to clean everything on the bilge. We carry out a lot of different tasks that keep us entertained during the hottest hours of the day. Sometimes, when we have almost done a task, a new one appears and the list get fatter again. But that usually happen and the boat appreciate our effort. In the afternoon we usually have spare time. We spend our time reading books, doing exercise, collecting coconuts and mangos from the trees, handcrafts with the wooden peaces at the bow or some of us have started to learn a new language. So we keep the morality up all the time. Also, everyday one of us are in charge checking the mooring lines,
doing the household tasks and cooking delicious dishes trying to impress the rest of the crew,
because we are exploring new horizons inside of the possibilities of our galley.

Luckily, we are used to sail for days on a ninety feet wooden boat. So this routine we have onboard is kind of familiar for us despite we are docked. But we hope this global situation improves and everything on the Nao Santa Maria will be okay to sail to Spain or another part of the world, because we will be here waiting to rig the sails up looking for fair winds again.