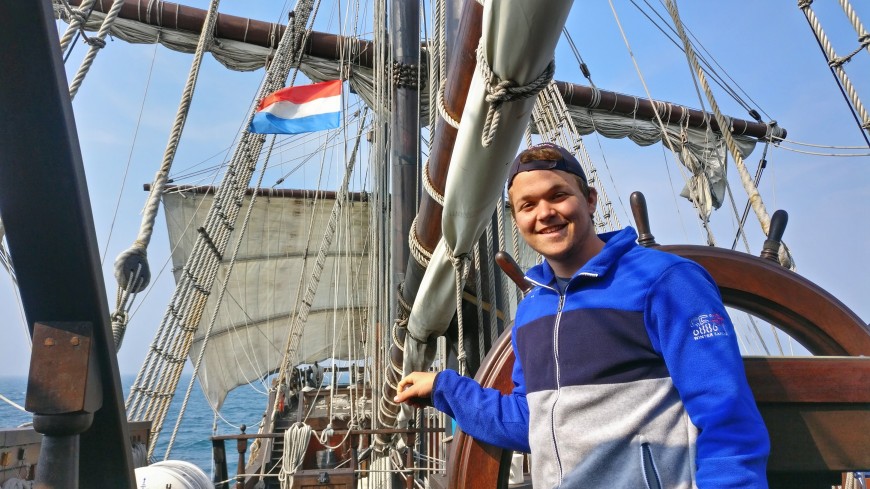 Chronicle from Bremerhaven to La Rochelle

It all started with Paul’s order to “let’s go long on the prow”. At that time he began a journey through the territorial waters of several countries: Germany, Holland, Belgium, United Kingdom and France.

900 miles in which a lot of things have happened, which I will try to explain in the lines below.

Day 1, Monday: This day was one of transition, in which we spent half of the day leaving the port (and canal) of Bremerhaven and the other navigating the north of the VTS of Germany. (The German highway of the sea) On this day little to highlight. A very narrow exit from the port and the amount of traffic that is in this area of ​​the world, in addition to the use that the northern European countries have of wind energy, crossing us with several of these parks along the crossing (and dodging them)

Day 2, Tuesday: At 04:30 the sun was seen, being normal in these latitudes and in the time in which we are. (Dawn very early and nightfall very late, having about 5 hours at night.) This day began as any other, but with a peculiarity: The wind began to blow us aft and we could get the ratchet. Also the fog wanted to accompany us throughout the day, with a visibility of about 70 meters. We managed to break the barrier of 10 knots! In the afternoon, and after 16 hours sailing, the wind left us at around 20:00, at the time my guard started. The fog was still on us, but with a somewhat orange color. Coincidences of life or not, that same afternoon I was talking to David about some things … One of them was that we had never experienced a storm at sea. Do you know what happened that night? … Exactly, that’s it. We were the guard on the bridge (Falete, Pablo, Carlos Quinto, David and a server), when we heard the typhoon of a ship quite close, about a mile. Pablo entered the bridge to check the AIS, Radar and others. After seeing that we did not eat any boat, we saw in the Radar a rather curious red spot. Automatically we knew it was rain. (Our radar is located on the Main Mast, and detects the rain fronts quite well)

We went down to cover the gratings, entrance to artillery … And Neptune opened the tap, and go tap …. A very strong storm, with lots of lightning and an important amount of water. It lasted that one hour. The radio, on channel 16, did not stop ringing. We caught the storm at a critical point, the Strait of Dover. Very much traffic and little visibility in one of the most congested points of the planet regarding the traffic of boats.

Some 50 meters like us and others 350 meters. Do you remember that we overcome 10 knots in the morning? Well, in this guard, thanks to the current and the wind … we exceeded 11.5 knots! A pretty entertaining guard…

Day 3, Wednesday: This day was somewhat quieter, as for everything. We were still in the English Channel, but outside the most conflictive section. We had fog all day, quite thick, although at around 6:00 pm it began to thin. The sea, as a dish. That’s how nice to surf!

Day 4, Thursday: After sailing without any movement, the deep sea began to enter us. We began to move, with waves of about one and a half meters. Already here we were going against the clock. The port of La Rochelle is a port with a lock, and we could only enter at high tide. It was to enter on Friday afternoon or Saturday morning … That same night, without fog and with good visibility, we managed to see the French coast.

Day 5, Friday: After maintaining a good speed throughout the day, and with a very pleasant time, we managed to get to La Rochelle. The trip seemed like it was past water, but we still had the most critical moment of the whole journey. We had to cross a small channel, with high tide, and with many light sailing boats in the middle. Once we cross this channel, we see the entrance to the lock. It measured about 15 meters wide, when our ship measured about 10. Just before entering, the port propeller stopped spinning forward. We passed the lock very quickly and it was time to turn the boat 90 degrees, for the berth. Very difficult, with little space, without port engine up front and with wind.

After a very complicated maneuver, Pablo managed to “park” El Galeón A very cool journey, that I have learned a lot, and the one that I thank my classmates !!! I would also like to end by sending a greeting to all my family, the “Lorente” and the “Ruiz”, and my other family from the San Fernando Handball Club.

And of course to all my friends / acquaintances of this world. See you very soon!!!!